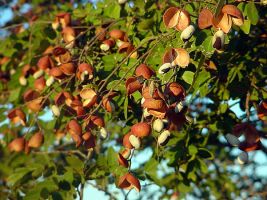 Copaiba is 98% sesquiterpenes and can oxygenate the cells of the brain directly as well as through the cardiovascular system.  This means that it can enhance brain function.  It is also amazing for DIGESTION.  However, the most remarkable thing about Copaiba may be that it AMPLIFIES the effects of the other oils that are used.

Copaiba has a high affinity to help calm and soothe muscles. It is most commonly used in blends to help calm both emotions and muscles. This essential oil contains high percentages (usually 40-70%) of β-caryophyllene (beta-caryophyllene), which is a natural bicyclic sesquiterpene (flushing, cleansing, and calming constituent.) The second highest constituent is alpha-humulene (usually around 10%). This is a monocyclic sesquiterpene (aka bisabolene as also found in Myrrh).

It is found in Breathe Again™ Roll-On, Deep Relief™ Roll-On, and Stress Away™ (regular and Roll-On).
This oil is best used for calming and soothing, rather than magnifying the effects of other oils. It is really quite good at calming so I believe this is where the myth of it being a magnifier came to be. You may use the term magnify or amplify but realize it is based on its ability to magnify its OWN constituents.

When Gary Young stated that this oil is a magnifier I think we all got a little ahead of ourselves. Yes he is correct, but when you start to research how this oils and its individual components work, you will see that it magnifies within itself. One constituent in this oil magnifies another constituent within this oil. (the pubmed study below confirms this). Anyone who has done a true test with this will see that it is a powerful oil but by combining it with an oil like Joy or Peppermint, it does not make that blend or single become stronger as I think so many of us interpret that word to mean.
So, copaiba is a magnifier of itself and is best used to help calm and soothe ANY part of your body that needs extra attention…………