Vitamin B3 is called niacin.  When it is ingested, a common complaint is a tingly, hot rash that lasts for about 15-30 minutes.  It is so common that it has been named the “niacin flush”.  This can be a bit unsettling, but it is definitely NOT serious – and it goes away by itself!

I personally take SUPER B every single day as I have been deficient in several of the B vitamins since I was a teenager.  Vitamin B deficiency causes fatigue as well as a host of other common symptoms.  This may be due to the fact that reduced levels of hemoglobin often are connected with vitamin B deficiency.  Since hemoglobin transports oxygen to every cell, the oxygen levels may be low.

I have found that when I take Super B with a meal including a starch, I do not experience the niacin flush.  If I take it on an empty stomach, I always do – even after taking it for many years.  I have also discovered that it passes more rapidly if I chew the tablets (They taste terrible, but I just drink some water afterwards and then eat a bite of something tasty.)

The positive benefits of niacin FAR outweigh the potential for a temporary flush.  When you combine NINGXIA RED, POWER MEAL, CORE SUPPLEMENTS and SUPER B, your energy levels will soar!!!  People often ask me what my “secret” is . . . well, it is these things . . .
Frances

Many thanks to Dorothy D.  for providing the following information about niacin on the Greater Joy group.
Niacin plays a significant role in reducing levels of bad cholesterol in your body. The niacin flush is the effect of high levels of niacin in the bloodstream. Though the flush is harmless, for some people it can be quite unpleasant, with symptoms that include itchy, tingling sensations throughout the body, sweating and shallow breathing. However, the cholesterol- lowering benefits of the flush may outweigh its uncomfortable side effects.

What Is Niacin?
Niacin is part of the Vitamin B family, specifically Vitamin B3. Niacin is a water-soluble vitamin; it is not stored in the body, and excess amounts of it will exit the body via urination. Higher levels of Vitamin B3 can improve the symptoms of certain ailments, including high cholesterol, diabetes and osteoarthritis.

Function
Niacin works within the digestive system assisting in the breakdown of food as well as converting food into energy. Additionally, niacin enables the capillaries in the bloodstream to open wider, allowing for improved circulation, detoxification and the lowering of cholesterol. In whole foods, niacin is found in dairy products, eggs, nuts, poultry, fish and lean meats.

Benefits
Niacin has shown to be one of the most effective treatments for increasing good cholesterol levels and lowering bad levels. According to Dr. Arthur Schoenstadt, niacin can work together with other cholesterol medications and treatments to lower high triglyceride levels as well as boosting HDL (good cholesterol) levels as significantly as 15 to 35 percent. Additionally, niacin has been shown to slow the buildup of plaque in the arteries, and possibly even reverse plaque buildup. Dr. Schoenstadt also states that niacin may have additional health benefits that include the treatment of migraines, depression, osteoarthritis, prevention of type 1 diabetes and promoting relaxation.

Effects
The niacin flush occurs when the niacin in your body expands the size of the small blood vessels. As the capillaries grow larger, they increase the blood flow which accounts for the reddening of the skin as well as the tingling feeling that typically accompanies the flush. As the capillaries expel waste, they produce histamine which causes the itchy sensation. The flush occurs mostly in the facial area; however, it can occur throughout your entire body.

Considerations
The niacin flush can be quite uncomfortable and can include some severe side effects such as rapid heartbeat, chills, shortness of breath, sweating and dizziness. However, though these side effects are normal and harmless, they may prevent you from taking niacin. To minimize some of these side effects, consider starting with a lower dose of niacin. 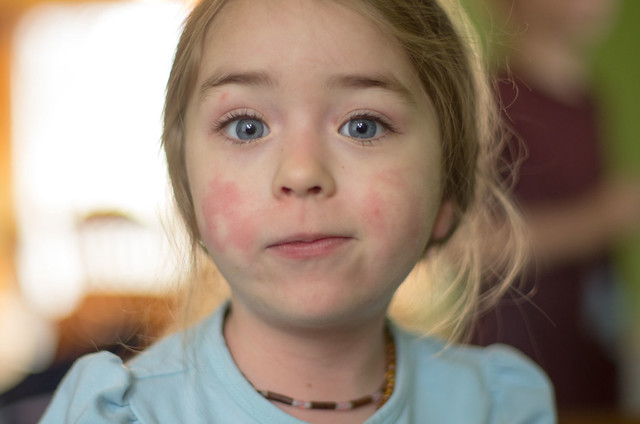